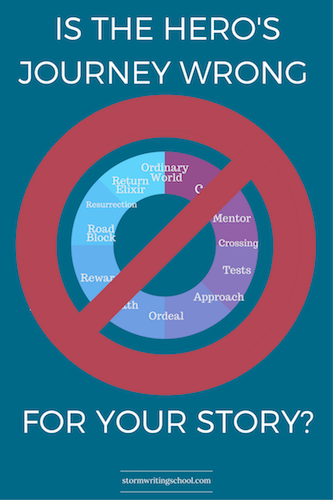 What if your story is not a hero’s journey?

Soon after my father died, I had a crazy dream.

In it, I came home from work, opened up the front door of my house, and discovered a party. Streamers hung across the room, along with signs that said, “Welcome Back!” My four siblings were standing around in the kitchen, dipping tortilla chips into salsa and laughing at jokes. No one paid me any attention. But then I saw my dad, sitting on a kitchen chair next to my mom. At this point, my family noticed me and waved me over to join them. My little brother Will slapped me on the back and smiled. He seemed the happiest. Will was the only family member who couldn’t make it to the hospital in time to see my father’s final breaths; he was at college out in Washington state. In the ensuing months, Will, a creative writing major, wrote some very powerful poetry about Dad. At his end-of-semester poetry reading, he brought the whole room to tears, including his professor.

“How is this possible?” I asked.

Someone said, “It’s because of Will’s poetry.”

“God likes a good argument,” my dad said. “And that’s what good poetry is. It’s an argument with God.”

“And this is the reward,” my sister added.

I love Joseph Campbell. I remember watching those old PBS interviews that Bill Moyers did with Campbell and thinking, “My God, this man has it all figured out.” He knows and believes in the power of story; he has convincingly demonstrated that stories and storytelling are inherent to being human; and he seems to have ascertained how to achieve spiritual transcendence, all while remaining an academic. Study stories for a living and be blissful doing so? Yes, please.

I was also impressed with the fact that Campbell seemed both sensitive to the emotional pain of our existence but also joyous. “We must be willing to get rid of the life we’ve planned,” he says, “so as to have the life that is waiting for us.”

I wish I could have met the man and asked him how. How do we come to accept the pain of, saying, losing a father? How do we learn to transcend that and find the “life that is waiting for us”?

I suspect he would have told me something along the lines of “story tells us how.” And certainly, his hero’s cycle offers an impressive aggregate diagram of human wisdom embodied in myth the world over.

It is truly an amazing anthropological insight.

It also happens to be a pretty solid template for a story.

But the hero cycle does have its limits. Tragedies, for instance, don’t map all that well on the hero cycle. Take Macbeth. Did he undergo a supreme ordeal, experience an apparent death, and then find the power within in order to triumphantly win the elixir of life and return to the ordinary world from the extraordinary to share the boon with his people?

What about the great Gatsby? Any of the kids in Lord of the Flies? Lee Chandler in Manchester by the Sea? Chiron in Moonlight?

That’s not to say that there’s a problem with redemptive tales. I love a great story of triumph. (And I don’t just mean superhero films or tales of underdog sports teams; you see the basic hero transcendence tale even in literary work like George Saunders’ brilliant short story “Escape from Spiderhead,” Adam Johnson’s novel The Orphan Master’s Son, or the film/novel Winter’s Bone, just to name a few.)

What if you want to write a story other than the redemption tale? The hero’s journey and a slew of other plot outlines will provide little help to you because built into their structural guide is a latter section of the story that is exactly what Macbeth isn’t—an ultimate sacrifice, followed by an epiphany-induced power surge, and a final push toward a (spiritual) full potential.

In recent weeks, I’ve been doing research on novel structure in preparation for a class I’m teaching, and I came across Dramatica’s theories on storytelling. They can tend to be a little esoteric, these theories. By their own admission, the writers at Dramatica warn that their theories are “complicated, use non-intuitive terminology, and feel dry and functional instead of warm and digestible.”

Still, their base concept is worth hearing out. They claim that stories are arguments.

As you might imagine, that struck a chord with me.

Stories are, according to Dramatica, “analogies to our own minds trying to solve a problem.” Hence, every story “begins with a inequity, an inequity that requires a resolution.” Dramatica defines inequity as “an unbalance, unfairness, or lack or stability,” by the way. You could just as easily use the word “problem,” which Dramatic defines as the “underlying cause of the story’s difficulties.”

The Dramatica folks go on to say that “from this inequity comes the story goal.”

The story goal is simply the solution to the problem. It’s the central point around which all characters orbit.

In fact, Dramatica redefines the terms “protagonist” and “antagonist.” They define a protagonist as someone who is pro-resolution and the antagonist as someone who is anti-resolution. Luke Skywalker is a protagonist because he wants to resolve the inequity (the Empire’s aggression) that kicks off the story. But in How to Train Your Dragon, Hiccup, the main character, is actually the antagonist if we go by Dramatica’s definition of the term, because he opposes the resolution.

In How to Train Your Dragon, the destruction of the Viking hometown of Berk upsets the balance of things and drives the Vikings that inhabit that island to seek resolution. Their leader, Stoick, pursues a course aimed at training the next generation of dragon killers. His son, Hiccup, does everything in his power to avoid, or prevent, the achievement of this goal. Stoick is the Protagonist of the film, Hiccup the Antagonist. Both play ‘good’ characters in the story.

I’m not going to start shifting my definition of protagonist right away; no one will understand me if I just start calling Lee Chandler from Manchester by the Sea the antagonist. But I can also see how he and Hiccup are antagonists in this conceptualization, and I do find it helpful to digest this theory.

In our own minds, we survey our environment and consider whether or not we could improve things by taking action to change them. The struggle between the Protagonist and Antagonist represents this inner argument: is it better to leave things the way they are or to try and rearrange them? The Protagonist represents Initiative; the Antagonist Reticence. Follow that and your story finds purpose.

So, the Dramatica theory is still rooted in the same anthropological notion as Campbell’s hero cycle: story speaks to something inherent to being human. Hence, even in our dreams, we invent narratives that attempt to wrestle with the problems we face in our daily lives. The inequity: my father is gone. The solution: bring him back.

“Sometimes,” the Dramatica folks say, “solving problems requires the centerpiece of a story, the Main Character, to undergo a major transformation in how they see the world. Sometimes they don’t. There is nothing inherently better about a story where the Main Character transforms.”

What are the implications of this theory?

Well, the Dramatica theories are somewhat of a rabbit hole, one I have yet to fully explore, but I find this paradigm helpful especially in conceptualizing stories in which the antagonist—in the typical sense of the term—isn’t a bad guy, or in which the Main Character doesn’t triumph. Indeed, I think the Dramatica paradigm might be helpful in conceptualizing your primary character relationship.

Here’s what they have to say about the central character relationship of your story:

This exists in every great story because it is the way an Author proves their argument. Once the Main Character makes that choice the story will either end in success or failure. This is the Author saying, See, make this change and great things will happen or See, make this change and tragedy will befall you. Stories are about solving problems, not mythical journeys of spiritual transcendence.

I might amend that final assertion to read, “Stories are about solving problems; some are also mythical journeys of spiritual transcendence.”

What do you think? Is it helpful to your story creation to think of stories as being about solving problems? Do you have a main character who may not change? Who may not transcend after all?