This is the third narration breakdown. I introduced this concept of the external vs. internal in scenes in my initial post on the four ways to break down page-level craft. The previous articles in this series addressed scene vs. summary and time digressions. 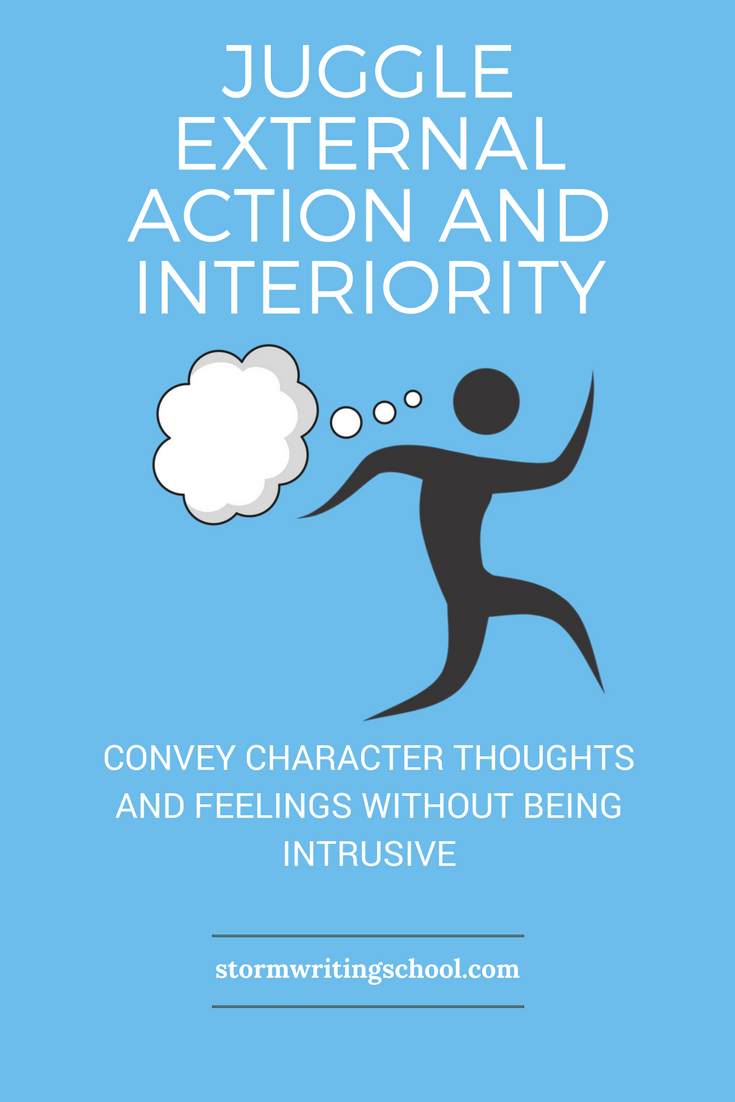 As I said in my introduction to this concept, it is perhaps the simplest division, even though there’s not always a clear separation between these two concepts.

External refers to what’s happening outside of characters’ minds. It’s the stuff that an observer could see. You could film it pretty easily.

Internal refers to what’s going on inside a character’s head: feelings and thoughts. Prose storytelling regularly informs us of characters’ interiority in ways that, say, a screenplay cannot.

But of course, sometimes interiority is simply implied through the external stuff. Smashing a coffee mug on the floor suggests anger; running away from a monster suggests fear. Readers can intuit how a character is feeling given the external context of a situation and the character’s external reaction. And we can intuit such things because we’re evolutionarily equipped to intuit the emotions of others via our mirror neurons, which pick up on all the external cues that occur when someone is experiencing an emotion.

Thinking is a bit harder to intuit, however, because it tends to be more context-specific and less generalized than emotions. When I see someone smirking while handling a cucumber at a grocery store, I don’t have the first clue about whether they’re thinking of the person they’ll have over for dinner later that week; their grandmother, whose cucumber salad was famous; the garden that they had when they lived in Tampa; or an off-color joke that a college roommate once told them. So we can’t leave thinking implicit; it often needs to be rendered explicitly.

When it comes to internal stuff, I like to differentiate between showing, telling, and explaining. Telling is stuff that could be left implied through the external action. A lot of emotions can be shown instead of told. You likely don’t ever need to tell us that someone is angry, for instance.

Instead, show it. That is, imply it through external stuff like character behavior and dialogue. Showing means that you allow readers to make judgments about the abstractions that underlie the external content. In showing, the impression is that the events are witnessed rather than reported.

Not everything needs to be rendered in concrete, scenic detail, however. Non-essential parts of the story, flashes to the past, and fast-forwarded sections can be summarized or reported—told, that is.

But there’s a third thing.

Explaining is what you have to do when there’s no way we could possibly intuit the information or interiority or past being conveyed.

George Saunders wrote a story called “Escape from Spiderhead,” in which a prisoner takes various futuristic pharmaceutical prototypes as a human guinea pig of sorts. We need and want the inside view of what the drugs feel like. Here’s an example:

What happened next was, Heather soon looked super-good. And I could tell she thought the same of me. It came on so sudden we were like laughing. How could we not have seen it, how cute the other one was? Luckily there was a couch in the Workroom. It felt like our drip had, in addition to whatever they were testing, some ED556 in it, which lowers your shame level to like nil. Because soon, there on the couch, off we went. It was super-hot between us. And not merely in a horndog way. Hot, yes, but also just right. Like if you’d dreamed of a certain girl all your life and all of a sudden there she was, in your same Workroom.

There are two other tricks to narrating interiority I want to discuss:

Close psychic distance simply means that the distance between the narrator and the character approaches zero.

Billy noiselessly took the lid off the cookie jar and looked inside. It was empty. Had Sheila already gotten there? It didn’t matter. Now, it would be easy to profess his innocence.

Right there in the middle, we get that question, “Had Sheila already gotten there?” Note there’s no thought tag, no “he wondered” or other indicator that the narrator is “speaking.” The narration goes straight to character interiority. In other words, the narration is (pretty much) character thought. That’s close psychic distance.

Infused subjectivity is when the narrator seems to be describing external things, but slips in a word or two that shows we’re getting that view of the external world filtered via a character.

Then Shiela pulled the cookie from the front pocket of her hoody and smiled that stupid smile.

That word “stupid” clues us into the subjective perspective behind this otherwise external description. Sneak in a subjective word (conveying a character’s perspective on things) and that’s infused subjectivity.

So, four tenets to keep in mind, then:

2) But sometimes you need to explain interiority.

3) You can use close psychic distance to give the effect of showing interiority.

4) You can infuse external stuff with subjectivity to give us a sense of a character’s viewpoint.

Why is all of this important?

You really have to almost trick us into reading the internal story. We think we want to see something external, something we can visualize with the mind’s eye. But it’s really the interiority that is most compelling. Lisa Cron says that in a nutshell, “A story is about how the things that happen affect someone in pursuit of a difficult goal, and how that person changes internally as a result.” And she goes on to use this apt analogy: “Think of the protagonist’s internal struggle as the novel’s live wire. It’s exactly like the third rail on a subway train—the electrified rail that supplies the juice that drives the cars forward. Without it, that train, no matter how well constructed, just sits there, idling in neutral, annoying everyone, especially at rush hour. . . . In a novel, everything—action, plot, even the ‘sensory details’—must touch the story’s third rail in order to have meaning and emotional impact.”

Below is a video analysis of a brief scene from Cormac McCarthy’s The Road, which does a wonderful job juggling the external and internal. Take a look and let me know in the comments if you have any questions or observations.