So, I just built an ottoman. (Never thought I’d write that sentence in my life, but there it is.) We repurposed a mattress from a toddler bed for the top–that’s how big this thing is–but it’s very sturdy and functional. I have very little skill in carpentry or woodworking, but all I had to do was look up some tutorial online and follow the instructions. Easy.

But novels do have structure. At the very least, we can all agree that novels have a beginning, a middle, and an ending. How much further can we take that structure? Are there other parts of a long-form story that are universal to all novels?

I’m very much a believer that writers must find the methods that work best for them. But just as a musician must first understand something about the structure of music (rhythm, tempo, scales, etc.) to be able to invent and improvise, so, too, must a story writer have some understanding of the structure of story.

My previous article featured a list of novel structure resources. Having combed through that list, I found some common ground among the various paradigms I investigated. Below is a video in which I walk through the plot points I saw over and over again in my research, and below that is a rough transcript.

In the beginning, which you could call Act 1, there are three-ish things you want to include.

The first is the stasis/hook. This goes by several different names, but the concept here is twofold:

1. You want to show us the world of the story pre-shift, pre-transformation, pre-irreversible change. This is all predicated on the assertion that story is about a transformation. That transformation does not need to occur within your main character; it may occur within the world of the main character or the circumstances, but by the story’s end, things are different than they were at the beginning. That’s all this is about. Stasis (aka ordinary world) is an essential. But you’ll also want to . . .

2. Hook the reader. You’ll want source of tension right away. Not the novel-wide conflict necessarily. A lot of stories opt for a prologue, which is a handy way to work in conflict, especially if the ordinary world/stasis of your main character is not super exciting. Dan Wells calls this the “Ice monster prologue,” a reference to Game of Thrones, the first book of the Song of Ice and Fire series, which features a suspenseful scene north of the wall involving . . . An ice monster. But The Matrix is another famous example. Neo’s life is pretty boring, so the film opens with Trinity’s running from the agents. Star Wars, also, has a prologue with Darth Vader boarding the rebel ship. This is not to say you need a prologue. Not by any means. In fact, there’s no doubt that prologues are a bit overdone among novice novelists. But you do need a hook.

Next: 3. the inciting incident. This is also known as the “call to adventure.” Or the disturbance. That’s what James Scott Bell calls it. It’s just something that shakes up the status quo for the main character. As KM Weiland says, “it’s the moment the Normal World is first significantly rocked by conflict.”

Okay, and then finally, in Act 1, you want a threshold. A door. This is a point of no return. Once through this door, the main character cannot go back.

That’s not how the inciting incident works. After the inciting incident, there’s a chance things could return to normal. But this point–sometimes called plot point #1, doorway #1, or the threshold–is an irreversible crossing. Think Neo taking the red pill in The Matrix.

Now, when I taught this class, a question came up: does this threshold crossing need to be a single event? KM Weiland has an article about the Key Event vs. Plot point #1, in which she discusses that these two events are two distinct and important sides of the same coin. The Key Event, she argues, is about leaving the normal world, which, she says, is often a physical departure from a physical setting. But it can also be leaving a previously held mindset or a complacent set of expectations. Plot point #1, she says, is about entering the new world.

Which is just to say that your doorway #1–which would include both the Key Event and Plot Point #1–may indeed be spread over a few scenes. In The Matrix, Neo takes the pill and steps out of the normal world, which for him is the matrix. But the crossing isn’t done yet. Because then he wakes up in his pod and is birthed into the actual world. So there’s at least two scenes there.

You don’t need that. You could have it all happen in one sentence. But the answer to the question is yes, the crossing could span multiple scenes and pages.

Still, in the interest of keeping this simple, Act 1 is about hooking us, showing us the pre-transformation world and/or character, showing a disturbance, and then pushing your main character through a threshold. All of that stuff is pretty universal across all novel structure paradigms.

(Yes, I’ve skipped the middle acts for now.) There are differences in conceptualization about the middle number of acts, but there’s a fair amount of agreement about the final act of the story, which includes Door #2, Crisis, Climax, Resolution; a second irreversible threshold, a decision, acting on the decision, and the final state of the character/world.

James Scott Bell says that the minimal structural components of a story = a disturbance and two doors. If Door #1 was the initial threshold into a new world, Door #2 is the one that makes the final battle inevitable.

You see some variation in the paradigms, and indeed, in stories themselves, regarding an event that occurs in proximity to this one: the All-Is-Lost moment or apparent defeat. Some have it preceding this Door #2 and make Door #2 more of a revelation. Some have it being Door #2. Some have it occurring after Door #2, spurring the crisis and climax. We could add an “apparent defeat” or “major setback” to the list, but you have a lot of flexibility as to where it goes or whether it’s separate from these other points, but it is a common story point.

But Door #2 ushers the character into another inevitability. With her new (and you could say, now complete) understanding of the problem, the character moves toward the final battle.

The Crisis is a decision moment. The character must choose between what he wants and what he needs, as KM Weiland says, or between the lie and the truth. You can think of this as being a true dilemma—between irreconcilable goods or between two bad options. In any of these cases, though, this choice will do a lot to reveal true character and to usher in the climax, which is the next point.

I don’t think I need to say much about the climax or final battle. There is universal agreement that a story has a climax.

And resolution is also pretty much unanimous. Resolution = the shift state. The character (transformed) living in a world (transformed). Character or world—one of those has to be transformed, not necessarily both.

Now, let’s back up to the middle of the story.

The only truly agreed-upon point in this large section of the story is the midpoint.

At the midpoint, the hero can no longer afford to just react; she must face down the conflict or give up the goal. KM Weiland points out that “this is a moment of truth when the MC realizes the central truth about the nature of the conflict.”

But I really like Allen Palmer’s conceptualization of the midpoint. He says, “someone (generally the antagonist) should hold up a mirror to the hero and make them aware of their flaw – typically in none too subtle terms. In doing this, it should be clear that the hero CANNOT continue towards their goal without addressing this flaw.” Palmer, thus, pushes for a midpoint that is geared toward the resolution. “The plot is not the end,” he says. “It’s just the means. The end is transformation of your hero and the midpoint is the fulcrum for that transformation.”

I have been guilty of being almost entirely ignorant of the existence of midpoints in literature and film. And then I started looking. I looked at a few oft-cited films and found that right around the half-way point—within minutes of it, usually—there was a pretty clear midpoint. And I picked up a few books, including Lincoln in the Bardo, which is a crazy mess of a novel that appears to be completely and totally unconventional. It eschews normal narration. It’s about Lincoln, yes, but its main characters are really just a couple of dead guys. And yet, there it is, on page 171 of 343. I won’t spoil it for you. But just five pages later, there’s even a division between Part 1 and Part 2.

Now, there’s not as much agreement on what the rest of the middle looks like, but flesh it out with complications and revelations. A good rule of thumb: 2-6 major complications before the midpoint and 2-6 after the midpoint. Sprinkle in some revelations—revelations are big reveals that change the character’s understanding of the nature of the problem. John Truby points out the big revelations in Alien, the first of the series.

Note that these are game-changing revelations.

So, here’s the aggregate:

I like this. It’s not overly prescriptive, but it recognizes that there are, perhaps some universals of story structure. That said, I’m no novel structure guru. This is just my comparative analysis of lots of them.

Be sure to see my Compendium of Novel Structure Resources for more information on my sources and, perhaps, to find yourself a more detailed aid in managing your novel structure challenges. You may not be an outliner, and that’s fine. But I think a novel structure can be helpful even if you’re just using it for after your first draft. The whole concept here is just about having weight-bearing pillars to hold up the long-form story.

There’s a grocery story nearby, just a half mile from my house. And there’s an underground parking lot below it. It’s free, so I always park there when I go, but I hate it because there are these enormous pillars every two parking spaces, so you’re guaranteed to have to navigate around these things, and our only car is a stupid minivan, which makes parking in this tight underground lot very tricky and claustrophobia inducing. And yet, I see why those pillars are necessary. You’ve got a long structure that is bearing a lot of weight.

When you’re telling a long-form story, you don’t want it to come crashing down—that is, for the reader to lose interest or engagement. And the key to engagement is all about that anticipated transformation that will occur within the story. The various plot points along the way just ensure that there’s movement toward that final shift state. 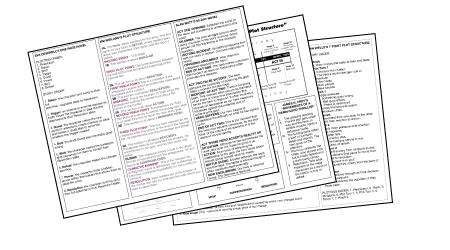 And here’s a diagram of the structure I discuss in the video: