We’ve all heard about the importance of conflict in storytelling. One of my favorite quotes in this regard comes from Charles Baxter, who says, “Only Hell is interesting.” If there’s not trouble in the story, we don’t want to hear about it. That’s not to say we want trouble to win out. On the contrary, when a story has elements of conflict or trouble, they work to expose what’s good and right and true about the protagonists with whom we empathize and sympathize.

But I want to unpack conflict a touch more because it comes in a few different varieties. 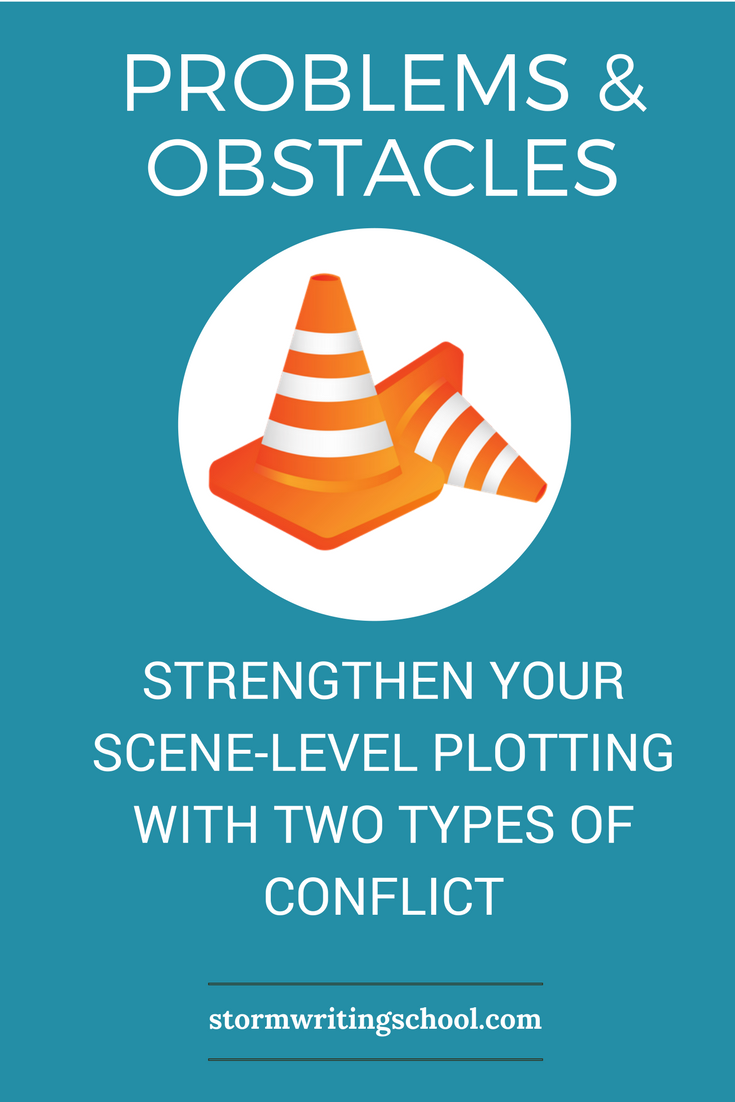 First, there is what I call a problem. A problem is something that precedes a character objective. We’re trapped on an island with a bunch of other boys under the age of 12 and no adults around. That’s a problem. It spawns the objective: to survive and create a society. I’m not a huge horror film buff, but most horror films I can think of have a problem scenario that spurs the objective. There’s a monster; let’s get away.

Sometimes, you begin a story with an objective rather than a problem, and then conflicts arise in relation to the objective. These kinds of conflicts are obstacles. Obstacles impede objectives. They get in the way. Quest stories, like Lord of the Rings or The Goonies are especially big on obstacles. That’s not to say that such stories don’t also have problems. They do. In Lord of the Rings, Sauron and his ring are the problem. But the bulk of the story is a quest to get the ring away from The Shire and then to get it to Mordor.

Jack and the Flood

Let’s say we have a protagonist named Jack. The river running through town floods, destroying the bridges and sweeping up cars. Jack’s girlfriend lives on the other side of the river. As a result of the flood—the problem—Jack wants to be sure his girlfriend is okay. This problem spurs the objective.

Now, Jack tries calling, but she’s not answering. Obstacle. He sends texts and emails, but no reply. Obstacle. He walks through town to the nearest bridge, but it’s destroyed. Obstacle. He walks up the river a bit, finds a guy on a rescue boat and asks him for a ride across the river. The guy refuses. Obstacle. You get the idea. Now, some of these, like the guy refusing to give him a ride on the boat, are pure obstacle. It doesn’t spur a new mini-objective. It just sends us back to the original objective. Whereas the flood itself is pure problem; there was no objective preceding it. Jack wouldn’t worry that his girlfriend had been swept up by water—and have the subsequent desire to be sure she hasn’t been—unless there were a flood.

Now, problems and obstacles are not mutually exclusive. In fact, every obstacle exerts some pressure on the character’s objective. That is, as a result of an obstacle, the character will at least temporarily focus on dealing with the obstacle rather than going after the larger objective.

Why is it worth making this distinction at all?

With some frequency, I see writers who have clearly taken the “conflict imperative” to heart. That is, they know that only hell is interesting. But they stray from objective or desire; they keep creating new problems instead of obstacles. And pretty quickly, the story feels scattered. It lacks cohesion. You want to be sure you tie conflicts to objectives.

On the flip side, I’ve seen writers who keep placing obstacles in the way but who never take us in a new direction. So the story feels predictable and stale.

Understanding this problem vs. obstacle distinction might help you troubleshoot your writing. If you can keep desire and conflict in constant interaction with one another, you’ll have a tighter story.

Take a look at the graphic below. It requires a little unpacking—this is no slick infographic—but it illustrates the concept of the detour. A detour occurs when a problem spurs a new mini objective for the character. That mini-objective seems to take the character away from the main objective, but it should not replace the main objective. 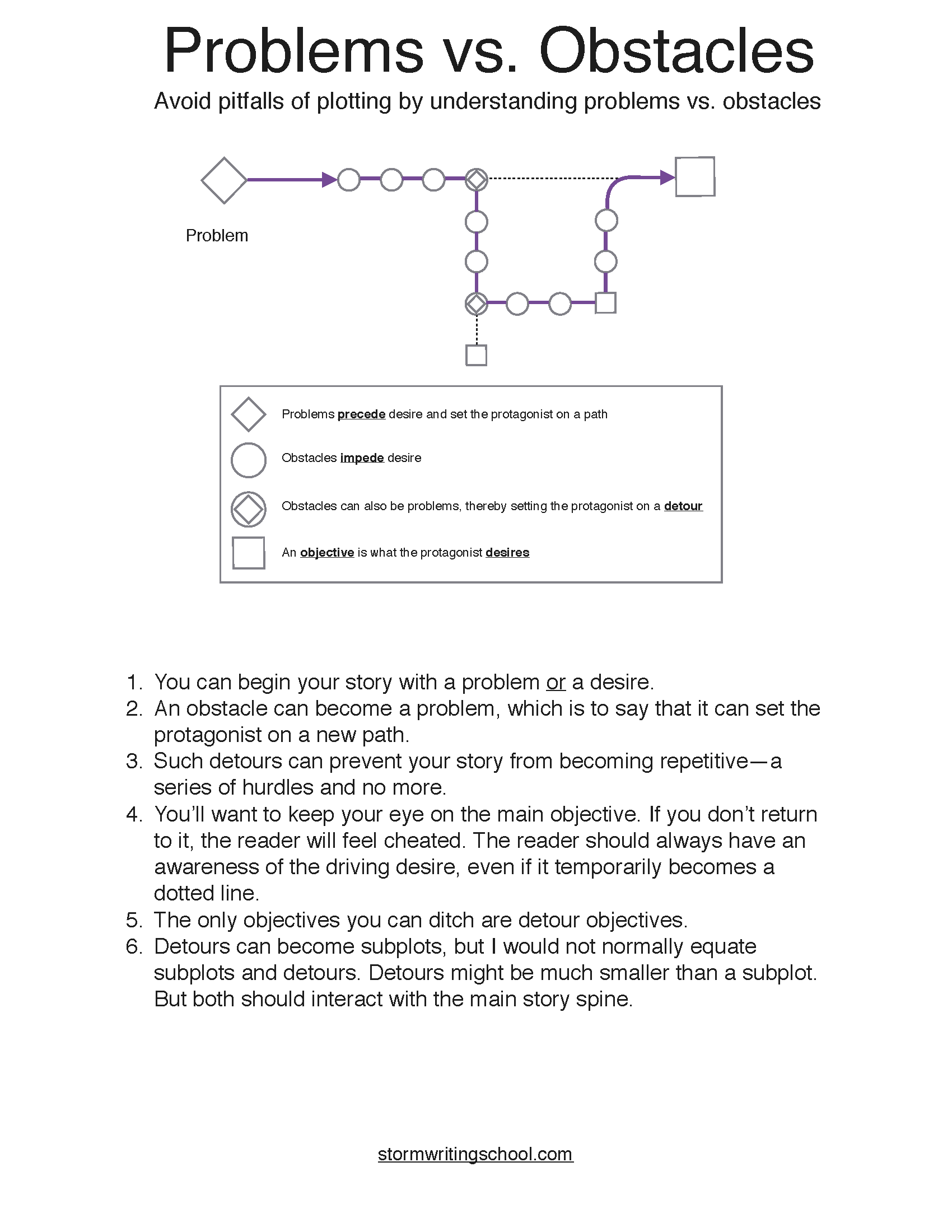 Let’s revisit Jack and the Flood. Here’s a basic plot outline we could work with:

In the case of Jack, we could have the pregnant woman trigger some interiority in Jack about his girlfriend and a discussion they once had about whether to have kids. Maybe Jack wanted kids but she felt ambivalent about bringing kids into a world she saw as spiraling toward disaster. The story-level objective thus remains on his mind. You can be even more subtle than that, but the reader should feel a pull toward that story-level objective all the time. 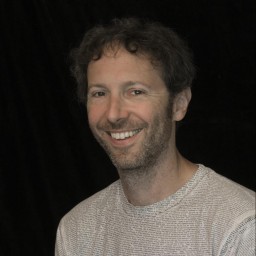